The Greatest Half in History

START on Ann Street next to Kentucky Historical Society RIGHT on Holmes RIGHT on Regan LEFT on High RIGHT on Broadway LEFT on Wilkinson LEFT on Main RIGHT on Capital (up/around and back from Capital Bldg.) RIGHT on US 60 (up hill) RIGHT on Glenn’s Creek and immediately into Frankfort Cemetery Loop through cemetery and back out onto Glenn’s Creek LEFT on US 60 to Main Street to Riverside Trail RIGHT onto Riverside Trail. STRAIGHT through intersection at Fair Oaks Ln. and transition to the sidewalk. Sharp LEFT at the entrance to Southern States, then make your way to the right of the Division of Water Building. Take a RIGHT just past the Division of Water, then LEFT on Old Lewis Ferry (long out and back past back entrance of Buffalo Trace). RIGHT on Wilkinson Blvd. to BP Station and Riverside Trail LEFT on Wilkinson Blvd. RIGHT on Broadway LEFT on Ann Street (Finish on Ann Street, same as START) 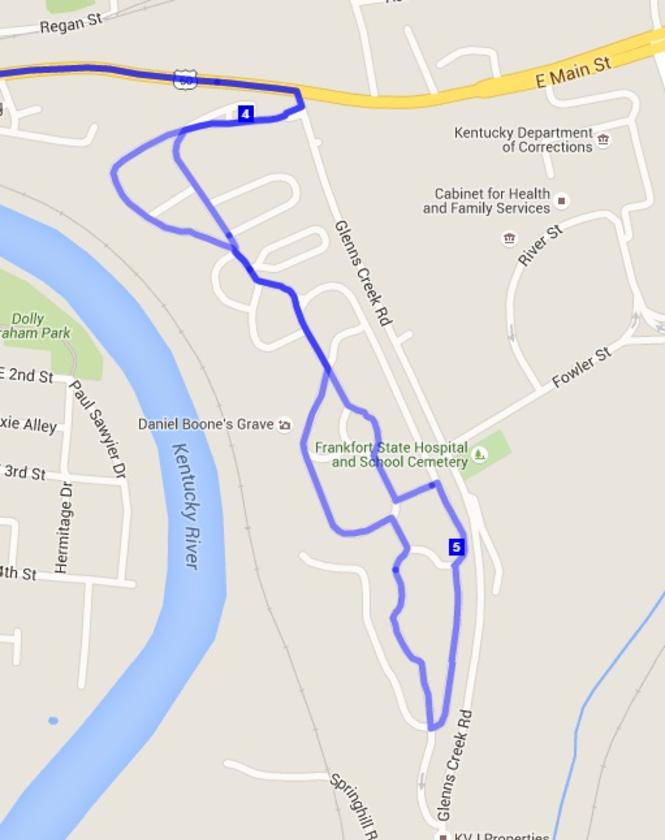 We ask that this portion of the race be run in silence (no cheering, music, headphones, etc.) in respect and remembrance of our Kentucky ancestors.

Just over 4 miles into the 13.1-mile course, after a challenging climb up U.S. 60, runners will enter the South’s first “rural” or “garden style” cemetery. With sweeping views of the Kentucky River and Frankfort lying below, participants will run by the final resting places of iconic pioneer Daniel Boone and his wife, Rebecca, as well as numerous other notable Kentuckians.

Incorporated in 1844, the cemetery was the inspiration of Frankfort community leader John Brown after a visit to Boston’s Mount Auburn Cemetery. Brown returned to Frankfort and set out to establish a community cemetery that would double as a public park and the state’s first arboretum. The 32-acre property, then called Hunter’s Garden, was purchased in 1845 for $3,801. To design the cemetery, Brown hired Scottish-born landscape architect Robert Carmichael, who created a style similar to Mount Auburn, with curving lanes, terraces and a circle of vaults.

A central feature of the cemetery is the “State Mound,” which honors all those Kentuckians who have fallen in defense of our country. The Mound features an 1865 Military Monument designed by the father of American monument art, Robert E. Launitz.